We would like to recognize three major whale research organizations that operate out of Snug Harbor. These three organizations have chosen Snug Harbor Marina due to our proximity to the whale transiting areas. Below you can find more information about each operation, with links to their website. We encourage everyone to please support these programs financially to allow them to continue their amazing work.

The boundary waters of the U.S. San Juan and Canadian Gulf islands, known as the Salish Sea, are one of the highest density whale-watching areas in the world. The boating traffic is high in the peak whale-watching season of May - September, not only for watching whales but for other activities such as sailing, kayaking and fishing. The Whale Museum's Soundwatch Boater Education Program was created to respond to this traffic and its effects on marine species. Although known primarily for educating whale watchers, Soundwatch also monitors areas within the San Juan County Marine Stewardship Area. 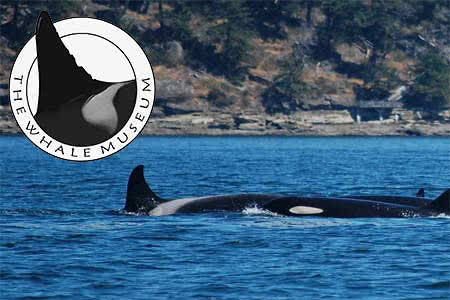 In 1976, "Orca Survey" was launched as a census to determine the status of the Southern Resident Killer Whales. Orca Survey is a long-term photo-identification study of killer whales (Orcinus orca) in the San Juan Island area of the Pacific Northwest. It was initiated by Principal Investigator Ken Balcomb in 1976 (under contract to the National Marine Fisheries Service) to ascertain the size of the population of Killer whales in the Greater Puget Sound environs of Washington State. For over three decades, the Center for Whale Research (CWR) has been conducting annual photo-identification studies of the Southern Resident Killer whale (SRKW) population that frequent the inland waters of Washington State and lower British Columbia

Click Here for more information about the Center for Whale Research 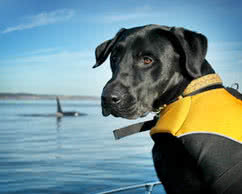 Meet Tucker, who has one of the most unique dog jobs in Washington State. He is a whale scat pointer. There are three resident killer whale populations found between Washington state and Alaska. These whales are called residents, because they spend about half of the year foraging in inland waters and rely almost exclusively on salmon as prey. The southern resident killer whales (SRKW) are the most threatened population. They experienced an unexplained 20.4% population decline between 1995-2001. The population remained stable from 2001-2005. However, five individuals (5%) were lost in 2006 and seven (8%) were lost in 2008 (Center for Whale Research, pers. comm.). This is an alarming rate of decline for an already small population.

Three primary hypotheses have been proposed to explain the decline:

We rely on Tucker, a Conservation Canine, to help us track down and acquire whale scat samples to test these hypotheses.

Click Here for more information about Tucker, the Conservation Canine and the Center for Conservation Biology